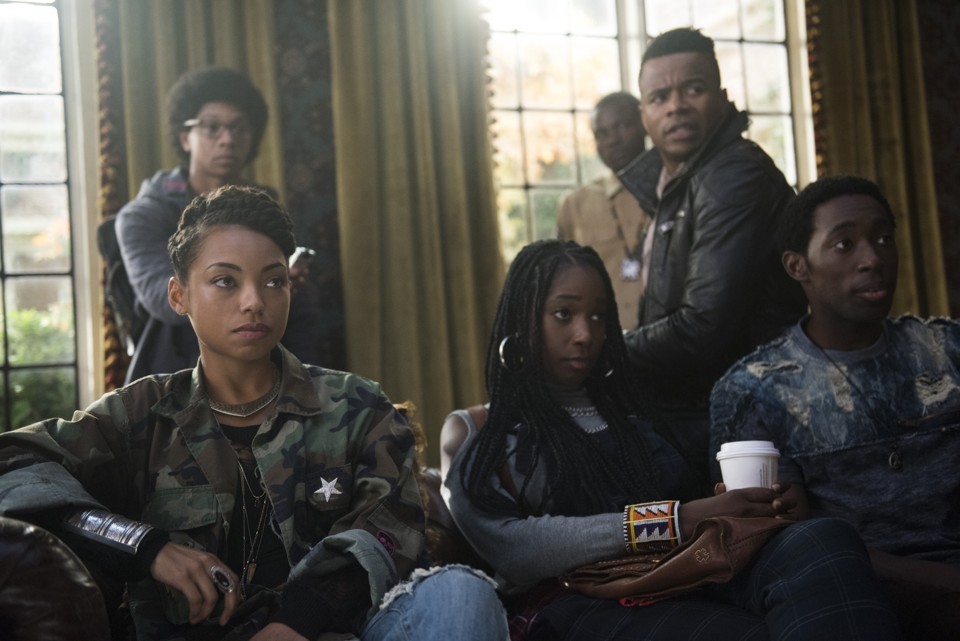 So, I finished Dear White People on Netflix and overall, just like the movie, I was impressed and thought at the very least this show can provoke a lot of interesting conversations. I liked how the show addressed so many different issues that students of color are faced with at a PWI (Predominantly White Institution) while addressing matters that members of the Black Community deal with.

One issue that began to be discussed was colorism. However, there was something I felt the writers left out (maybe they’ll address it in the next season but…). Can we talk about Reggie’s fascination with the main character, Sam? I mean he mentions that he wants to marry a Black woman and have Black ashy babies, but just like many men in our community, seems to have a fascination with a fair skinned, mixed, green eyed black woman with super curly hair. Don’t get me wrong, Sam is Black but she is also white. I felt that the show could have better addressed the fixation so many men in our community have on fair skinned women. I spent the whole show wondering why he couldn’t just date Joelle. She was a better friend, seemed interested in the things he was interested in, was still apart of their  Black Student Union activist team and let’s be honest, kept him grounded. Joelle was just as “For The People” as Sam was, and according to the flashbacks, Sam curved Reggie the first few years of school…. So, why does he like her so much again? I’m confused.

Please don’t tell me that Reggie, arguably the most woke man on the show, has fallen to white washed standards of beauty. He represents men who love to say that they want a girl that is super woke, but still is very superficial when it comes to their choosing of a mate. Further more, we have CoCo ( which I kinda liked as a character) the only dark skinned sista that gets some play, but she also ascribes to “social passing” with her need for a weave/wig,(I don’t have an issue with weave, just her need for it) and her desire to live in a white dorm, date a white man, etc. Even with her problems, she is still seen as desirable because of the way in which she presents herself. Don’t get me wrong, the girl can dress…but she is hiding! She doesn’t want anyone to know where she is from in an effort to save herself from some sort of ridicule. But we have Joelle, confident and open about who she is, equally as beautiful… I’m sorry, but can Joelle can some play? Is she too Black for everyone on the show to Date? Too Black as in too dark skinned, wearing braids, and not having a Kim K body…To me she was BEAUTIFUL, maybe she’ll get Reggie (her crush) in the next season, but I also hate the fact that she’s the second pick. Our community has an issue with mesmerizing  over one representation of the Black woman, which so happens to be the whitest version, and it needs to be addressed.

The only other issue that seemed problematic was how they portrayed Black sororities on campus..and yes I’m bias lol. But, who gave them permission to use A Different World’s Alpha Delta Rho sorority (with AKA colors) and them paint them in such a bad and bias light. The writers were clearly bias and I’m obviously still in my chest over it but whatever (haha). It goes without saying everyone’s experience with Greek life is not like the one portrayed on the show, I know that wasn’t the focus of the show, but don’t put organizations down in an effort to prove some sort of point. Also, if you want to address issues that are problematic, highlight the positive things as well. Black people aren’t the only people watching these shows and we don’t want folks walking away from a show or a film thinking that’s the standard of how any of the Divine Nine Organizations are ran.

Overall this show was great, if you haven’t watched it, please do and engage in dialogue after. (Conversations about shows like this are major key.) After you watch it, let me know what you think!

View all posts by Veronica Craig